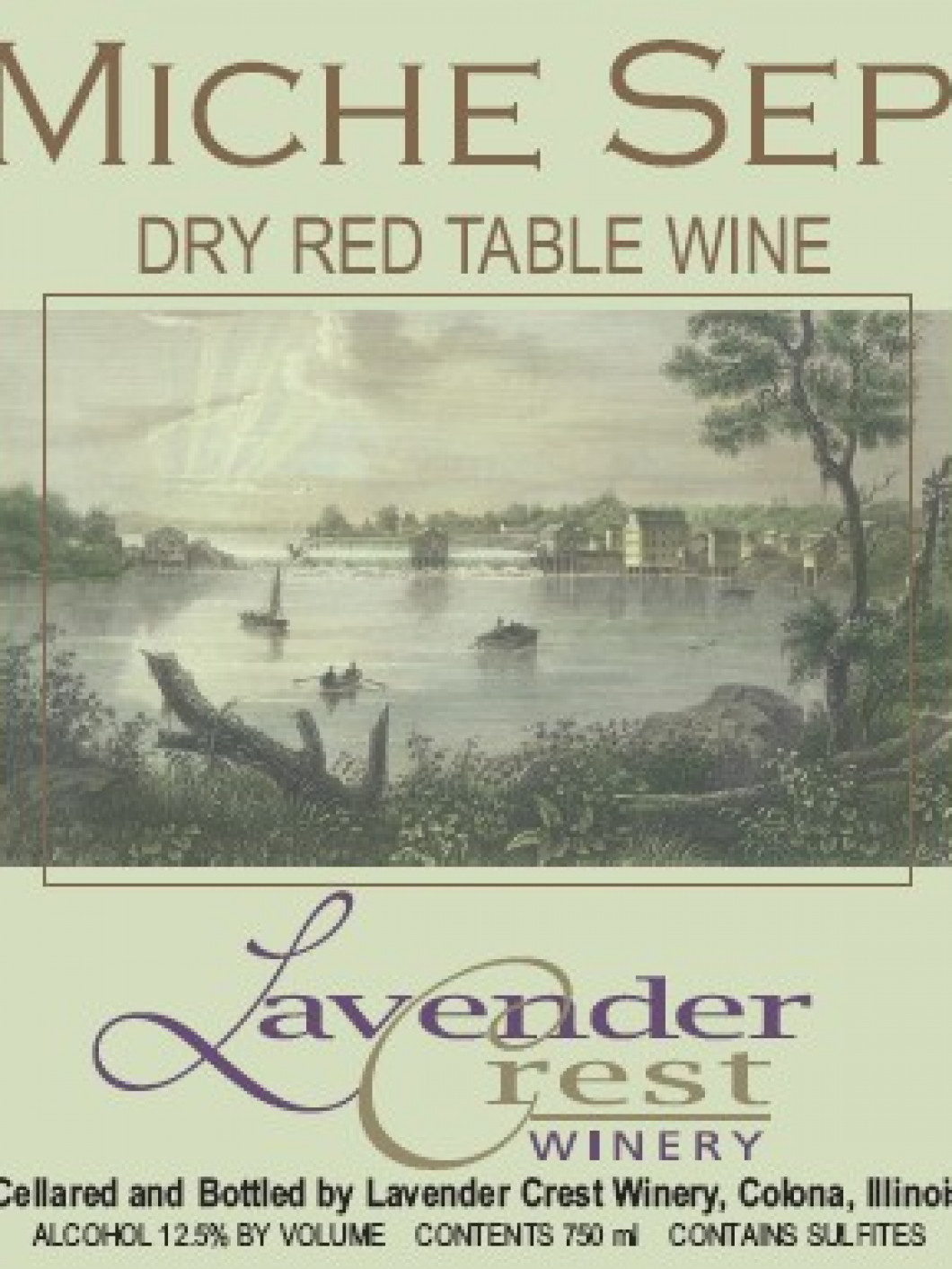 Named in honor of the Quad Cities' greatest natural resource, the Mississippi River, this subtly "oaked" Cabernet juice from California and Norton from Missouri is finished dry. Serve at room temperature with a juicy steak or hamburger.

Jean Nicolet, under direction of La Salle, learned of a great river called Miche Sepi from the native Americans. For nearly 200 years since, agriculture has been the primary user of the basin lands. The value of the agricultural products and the huge agribusiness industry that has developed in the basin produces 92% of the nation's agricultural exports, 78% of the world's exports in feed grains and soybeans, and most of the livestock and hogs produced nationally. The Mississippi River and its floodplain are home to a diverse population of living things that include at least 260 species of fish and 145 species of amphibians and reptiles. Forty percent of the nation's migratory waterfowl use the river corridor during their Spring and Fall migration and 60% of all North American birds (326 species) use the Mississippi River Basin as their migratory flyway. To move goods up and down the Mississippi, the U.S. Army Corps of Engineers maintains a 9-foot shipping channel from Baton Rouge, La. to Minneapolis, Minn. Over 18 million people up and down the river use the Mississippi River Watershed for water supply. 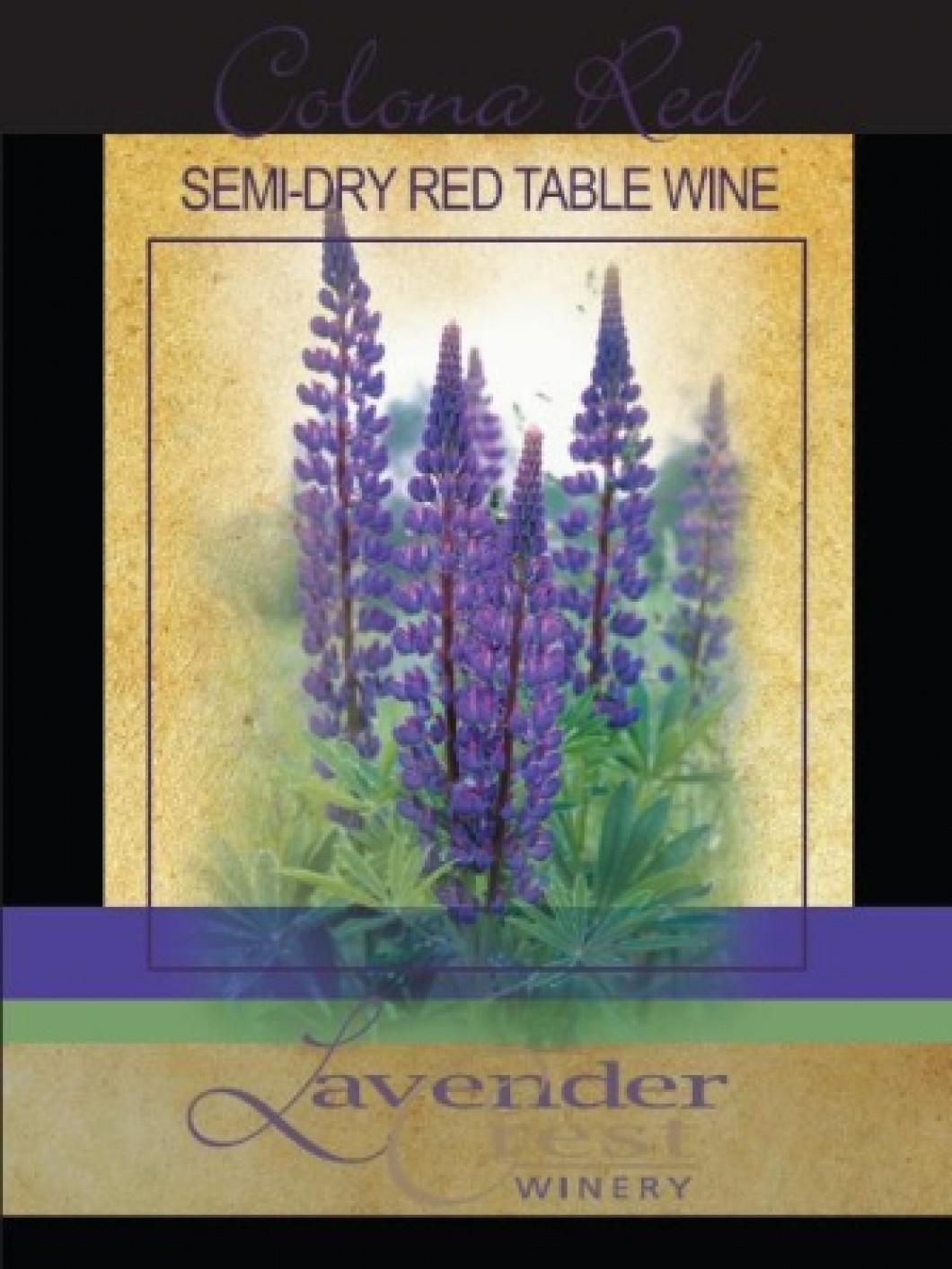 A semi-dry blend of Merlot and locally grown Frontenac should be served at room temperature with a juicy steak, prime rib, spicy pasta or pizza. Raspberry, cherry and chocolate accents make this a wine you can enjoy on any occasion.

Our Colona Red and Colona White wines are as intriguing as the city they are named after. Located in Henry County, Colona, Illinois became an official town in 1855. However, no one really knows how the name came about. Legends support four theories; from discovering "coal on a bank", to the abundance of wild flowers creating "cologne" in the air, a traveler named Mr. Colona or a shortened version of the word "Colonial". Since then, the city has embraced such visitors as Abraham Lincoln, Tom Mix and General Pershing and is called home by opera star, Tony Dillon, baseball player, Baby Doll Jackson, racing champion, Lou Fenno and last but not least, Lavender Crest Winery. Cheers! 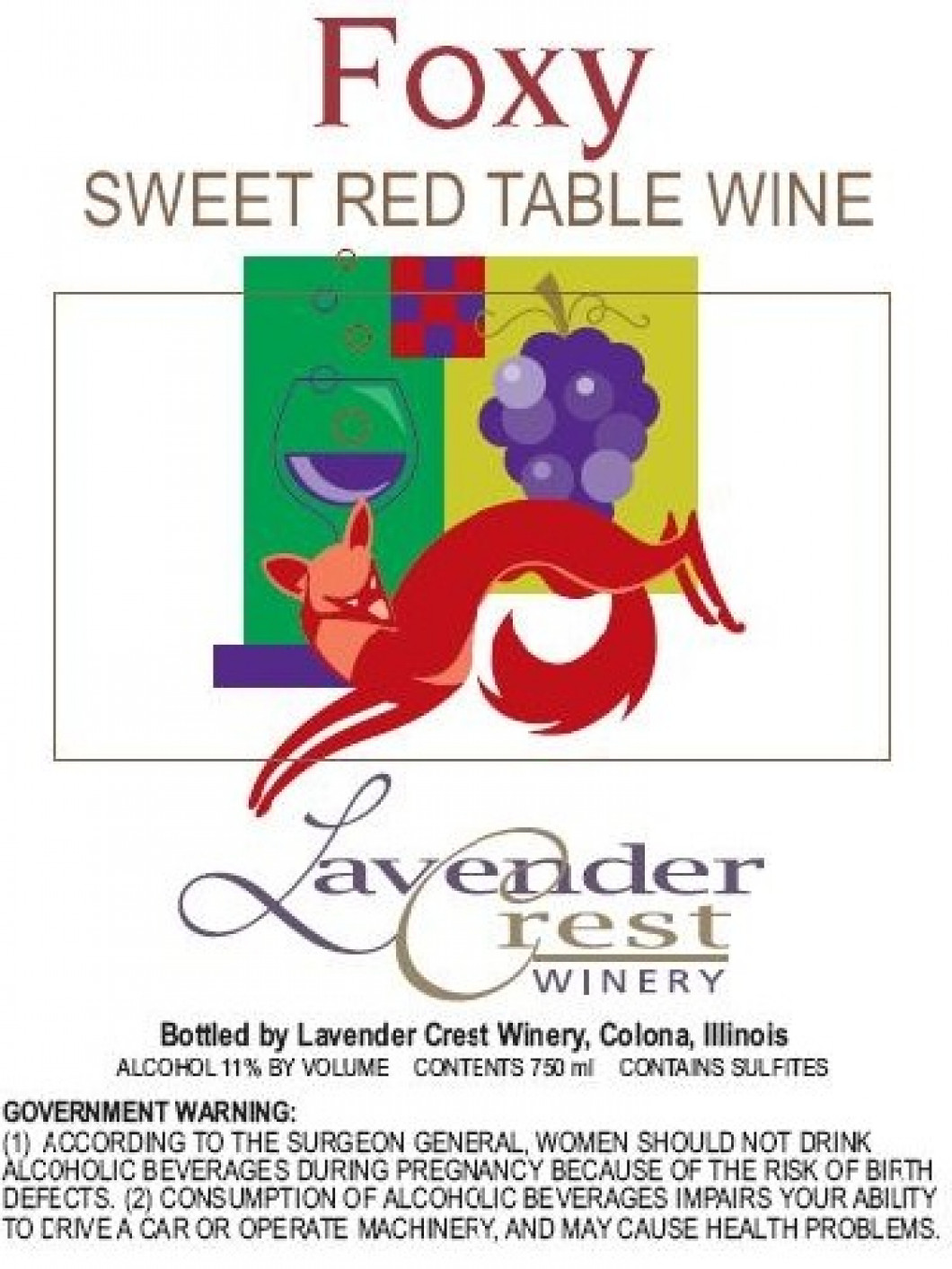 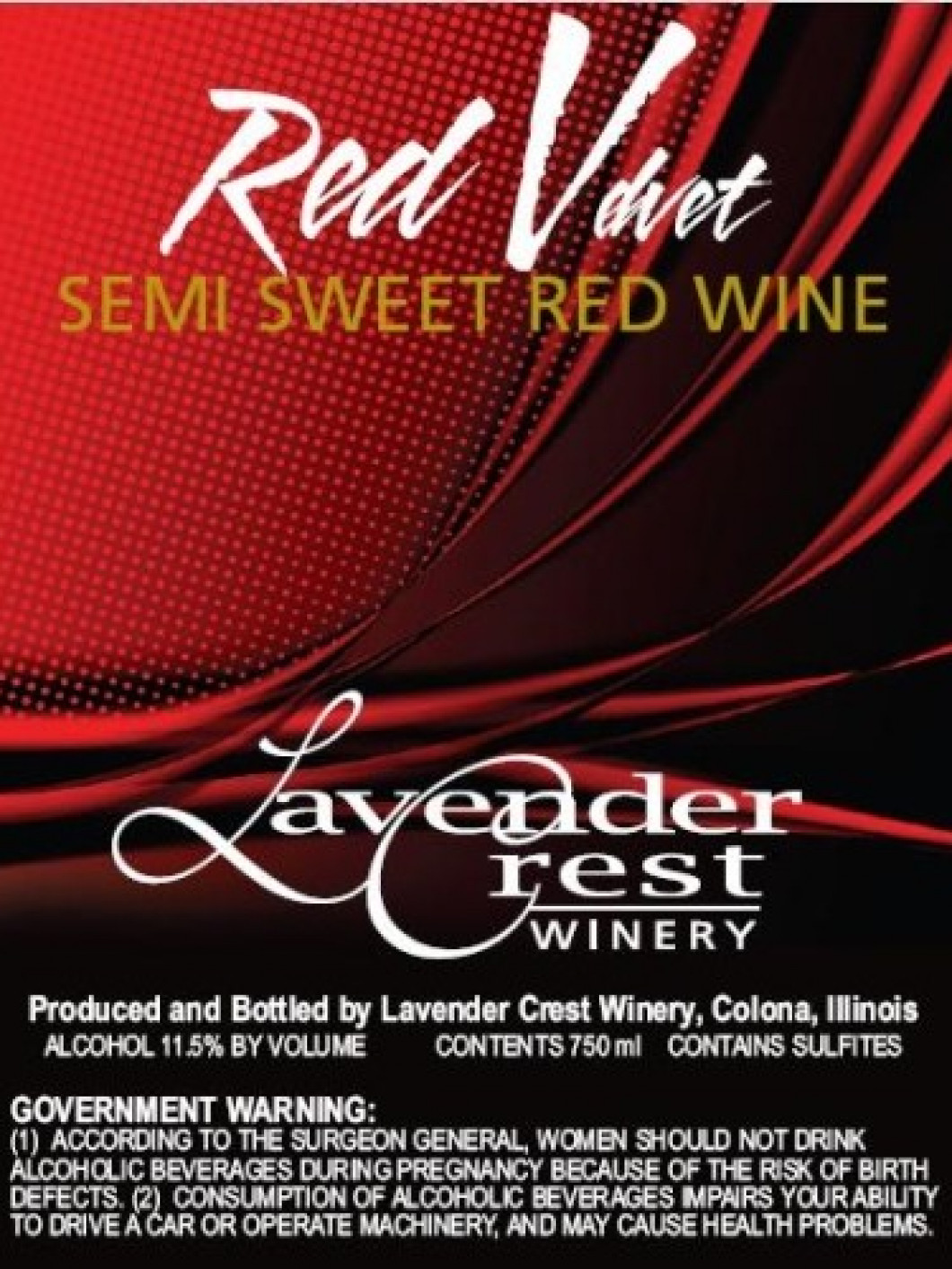 A semi-sweet red wine made from locally grown Marquette & Frontenac grapes from Backroad Vineyard, has a vibrant red color and dark berry fruit characteristics. May be served at room temperature or chilled. Outstanding served with chocolate. 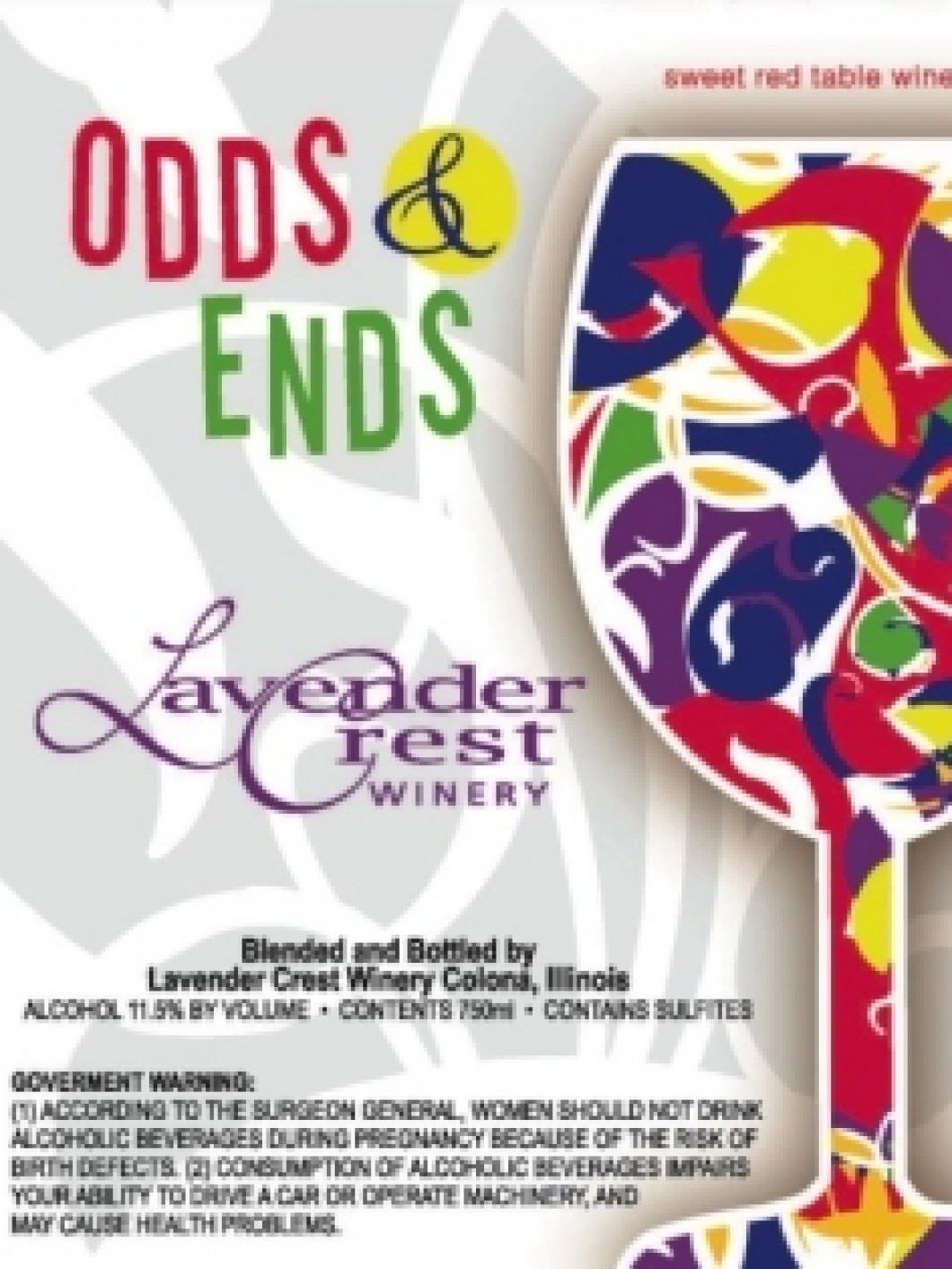 A semi-sweet wine blend based upon the winemaker's choice, this wine will be different with every bottling. Best served chilled. 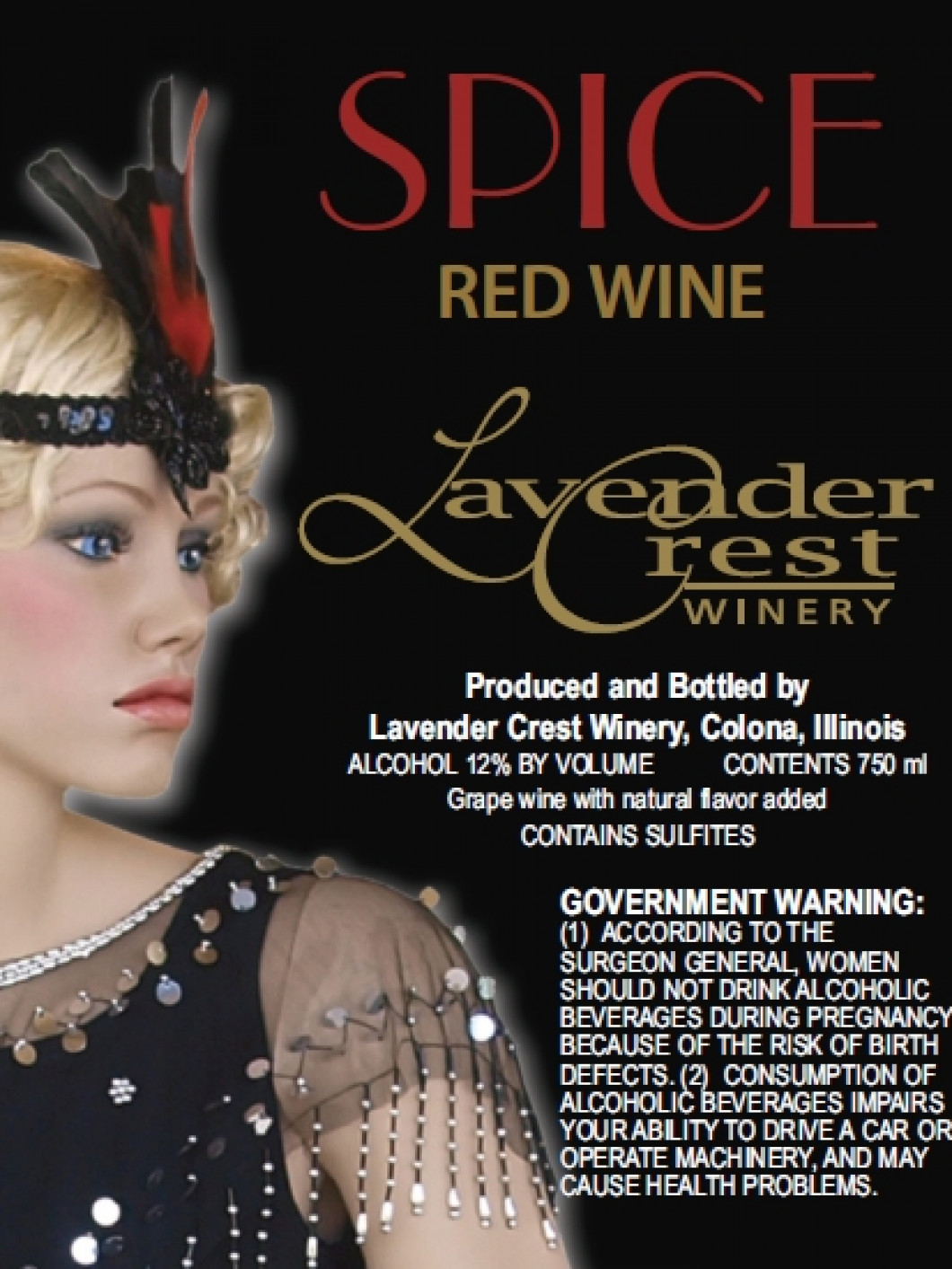 This exotic mixture of several spices transforms a blend of several of our fine wines into the perfect libation for fall and winter enjoyment. Served cold or warmed, Spice is a crowd pleaser to be enjoyed with a variety of foods. 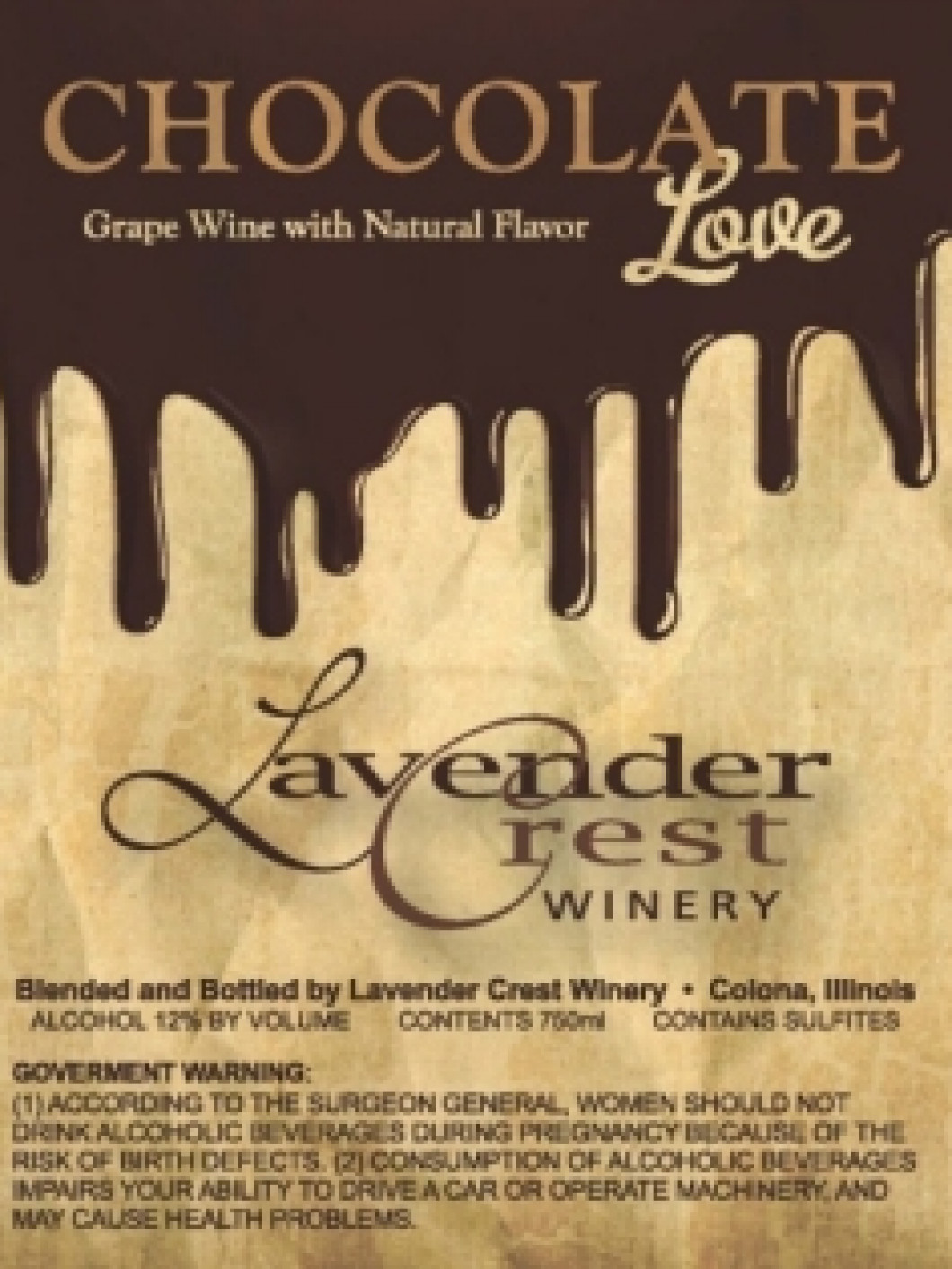 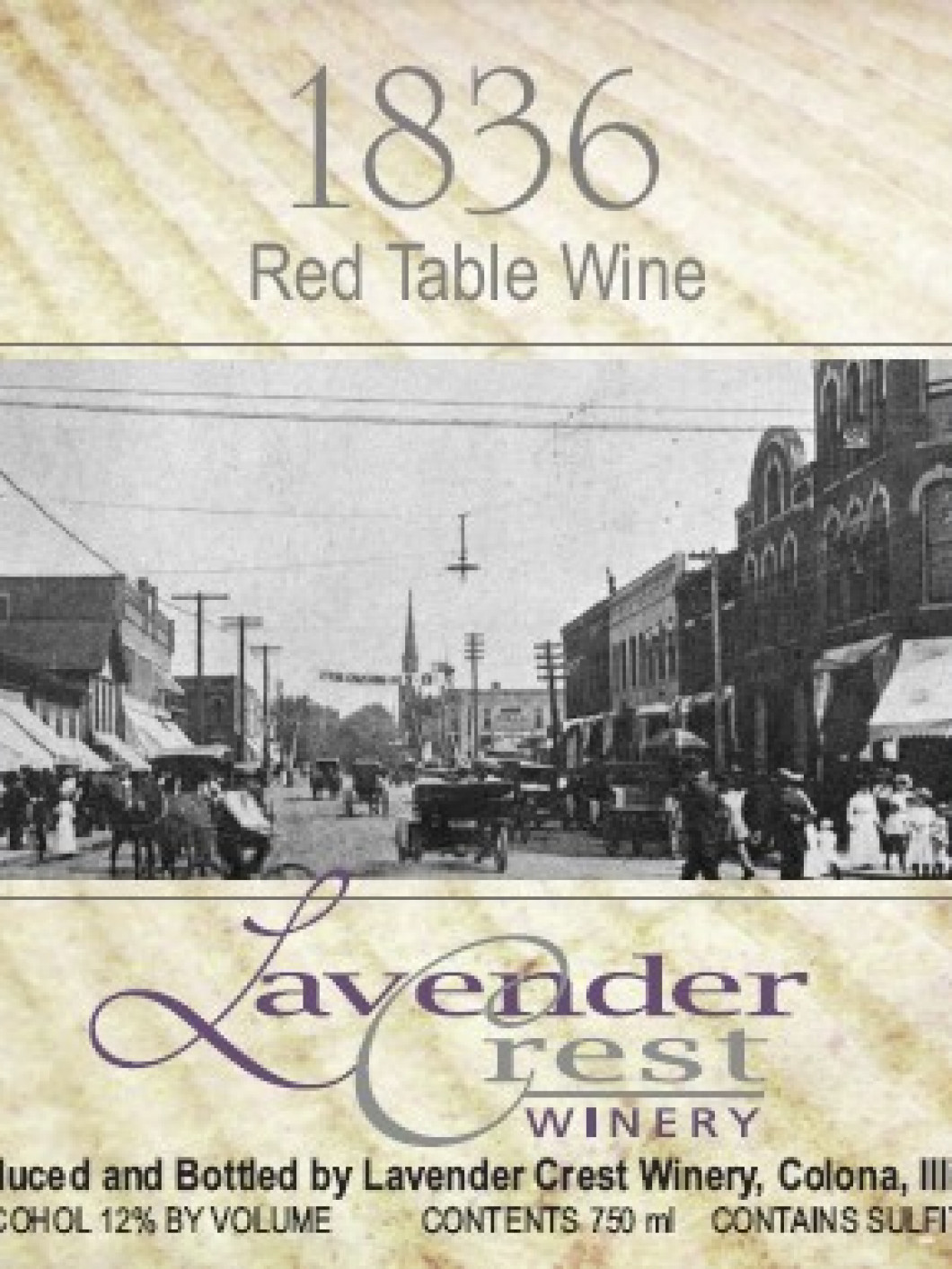 A semi-dry red wine created from Marquette grapes from Backroad Vineyard and California Pinot Noir. Barrel-aged to give it a touch of oak complexity, this wine should be served at room temperature with a steak, prime rib, spicy pasta or pizza. Named 1836 in honor of our neighboring town Victorian Geneseo.

Geneseo, a name of American Indian Origin meaning "Pleasant Valley", was established in 1836 by eight families from Geneseo and Bergren in Genesee County, New York seeking religious freedom and financial opportunities. The original 40-acre town was recorded in Henry County on July 12, 1838 and the city was chartered by the state on February 16, 1865.

Today, Victorian homes still line the cozy neighborhoods and downtown is filled with quaint, unique shops. Geneseo's rich heritage has been preserved in Victorian glory and awaits your exploration.

Government Warning: (1) ACCORDING TO THE SURGEON GENERAL, WOMEN SHOULD NOT DRINK ALCOHOLIC BEVERAGES DURING PREGNANCY BECAUSE OF THE RISK OF BIRTH DEFECTS. (2) CONSUMPTION OF ALCOHOLIC BEVERAGES IMPAIRS YOUR ABILITY TO DRIVE A CAR OR OPERATE MACHINERY, AND MAY CAUSE HEALTH PROBLEMS.